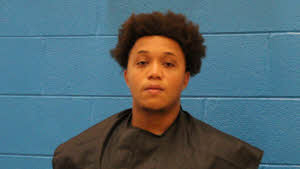 Deputy Caleb Baliles with the McDowell County Sheriff’s Office charged 21-year-old Jaydakis Kashaune Hamilton of Forest City with Fleeing to Elude Arrest, Possession of a Stolen Firearm, Possession of a Firearm by a Convicted Felon, (M) Carrying a Concealed Weapon, Reckless Driving to Endanger and No Operator’s License. A Magistrate issued Hamilton a $70,000 secured bond.

On July 29th Deputy Baliles attempted to stop Hamilton’s vehicle after he failed to stop for a driver’s license checkpoint on Ashworth Road. Hamilton refused to stop and led Deputies on a high-speed pursuit down US 221S. Deputies canceled the pursuit for safety reasons, but eventually located Hamilton and his car on Spooky Hollow Road. Hamilton was arrested and a search of his car turned up a handgun stolen from a Rutherford County man.