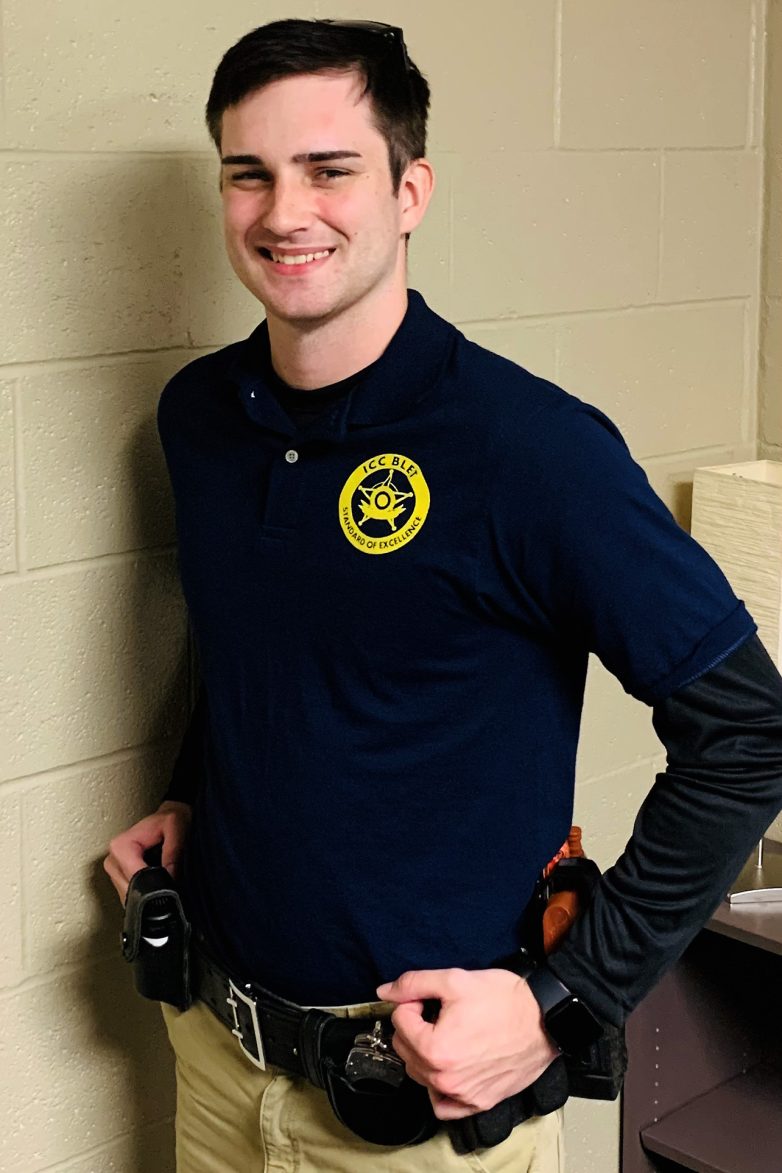 SPINDALE (June 14, 2022) – Dozens of students go through the Basic Law Enforcement Training program at Isothermal Community College each year. Most of them have both legs.

Jacob Poteat is the exception, and he’s determined that he’ll turn his challenge into success.

Poteat, 24, lost his foot in May 2018. He had just turned 20 a few months earlier and had twisted his ankle at a trampoline park.

“My ankle was really swollen, and it just never got better,” he said. “When I went to see Dr. Glover at Rutherford Orthopedics for an x-ray, they found a calcification.”

After more tests and a move to an orthopedic oncologist at Levine Cancer Center in Charlotte, a diagnosis of osteosarcoma, a rare bone cancer, was made. 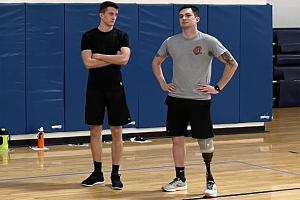 “They didn’t sugar coat it,” Poteat said. “They gave me two options. I could try chemotherapy, which they said wasn’t very successful on this kind of cancer. Or, I could have my leg amputated.”

The physician recommended the amputation but told Poteat it was his decision to make.

“I had a week to decide, he said. “I spent a lot of time talking about it with my family. It was almost like it wasn’t real. I had started out working as a volunteer firefighter in high school, then I got certified and went to work there full-time. But I had always wanted to go into law enforcement and now I was thinking that’s not going to happen. It was the hardest decision I’ve ever made, but I went ahead with the amputation.”

The surgery was a success, taking his leg a few inches below his knee, but the real work had just started. Poteat had to go through a regimen of chemotherapy as a precaution, then in July he got his first prosthetic leg.

“I had to learn how to walk all over again,” he said.

By early 2019, Poteat was back at work at Hudlow Fire Department getting routine checkups.

“In April of 2020, an opportunity came open to go to work for the Rutherford County E911 Communications Center as a dispatcher,” Poteat said. “That put me much closer to all of law enforcement and emergency services. I kept thinking about coming to Isothermal for the BLET class. I just kept wondering about the physical aspect and questioning if I could do it.”

Time passed and Poteat continued to regain his strength and walking ability. He got a second prosthetic leg.

“The second one was a whole lot better than the first and I could get around great,” he said.

Another bit of help came in the form of the donation of a running blade prosthetic from a Charlotte-based foundation headed by Jenn Andrews, a young woman who is also a sarcoma survivor and amputee. The Move For Jenn Foundation focuses on sarcoma awareness, raising funds to offer grants to sarcoma amputees for activewear prosthetics and research grants.

A running blade can cost more than $10,000 and insurance rarely pays for one.

“I thought I have to get back out there and make a difference in my community,” said Poteat. “This is a dream I’ve had since I was a kid.”

He spoke with Philip Bailey, the BLET director at Isothermal, and decided to sign up. With a May starting date, Poteat ramped up his workouts in February.

His biggest apprehension was the Police Officer Physical Ability Test (POPAT), a tough test of agility, strength, stamina, and speed that is required for every law enforcement officer candidate in North Carolina.

Nearly four weeks into the training, the class had its first practice POPAT.

“I passed it,” said Poteat with a grin. “That’s my highlight so far. It was a real victory because, at some point in time, I didn’t think I could do it. It’s given me a lot of confidence to finish out three more months. I want to do this on my own. I don’t want any kind of accommodation.”

Poteat says his classmates are some of his biggest supporters.

“It’s cool knowing we are the future of law enforcement,” he said. “We are working hard and developing a strong bond.”

Poteat is a graduate of R-S Central High School. His parents are Mark and Renee Poteat.

For more information on the Isothermal BLET program, contact Brenda McFarland at (828) 395-1668 or bmcfarland@isothermal.edu or Director Bailey at 828-395-1448 or pbailey@isothermal.edu. Enrollment is limited, and an application packet is required to be completed and returned prior to the start of training.

For more information on the Move For Jenn Foundation, visit moveforjenn.org.