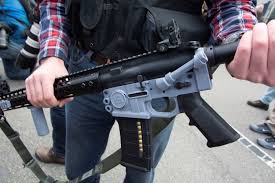 Department of Justice
U.S. Attorney’s Office
Northern District of Georgia
Jelani Kazmende, Wiley Martin, and Robert Louis Jeffords, Jr., have been arraigned on federal charges of dealing firearms without a license, possession of machineguns, possession of unregistered firearms, and conspiracy. Kazmende, Martin, and Jeffords were indicted by a federal grand jury on July 12, 2022.

“Equipped with large capacity magazines, illegal machineguns like those allegedly transported, possessed, and sold by these defendants present immediate danger to our community,” said U.S. Attorney Ryan K. Buchanan. “To protect the community, this office and its partners will identify, target, and prosecute to the fullest extent those who peddle these weapons unlawfully.”

“With distressing regularity, we see the damage that criminals can inflict on our communities with weapons of war,” said Keri Farley, Special Agent in Charge of FBI Atlanta. “Illegal guns have no place in Georgia and the FBI will continue to work diligently with our partners to remove these dangerous criminals and weapons from our streets.”

“Because of the combined efforts of ATF and its law enforcement partners, criminal elements have been surgically removed from the community of Marietta and placed where they belong: into the criminal justice system to be processed and prosecuted for illegal activity,” said Alisha Jones, Assistant Special Agent in Charge of ATF’s Atlanta Field Division.

According to U.S. Attorney Buchanan, the charges, and other information presented in court: On June 2, 2022, outside of a restaurant in Marietta, Georgia, Jelani Kazmende allegedly provided five privately manufactured “ghost guns” to Wiley Martin, a multi-convicted felon who was then serving a term of state probation. “Ghost guns” refers to firearms, including a frame or receiver, completed, assembled, or otherwise produced by a person other than a licensed manufacturer, and without a serial number placed by a licensed manufacturer at the time the firearm was produced.

The firearms that Kazmende allegedly gave to Martin lacked any genuine manufacturer’s makings or legitimate serial numbers. Inside of each firearm was a drop-in “auto sear device” designed to allow the firearms to fire multiple rounds with a single pull of the trigger. Following his receipt of the firearms, Martin sold all five weapons—and a sixth full-auto pistol—to undercover FBI agents.

On June 16, 2022, Kazmende and Martin met Robert Louis Jeffords, Jr., outside of the same turkey leg restaurant where Kazmende and Martin had met two weeks prior. Kazmende, Martin, and Jeffords removed from Jeffords’s truck 16 privately manufactured firearms chambered in various calibers. Separately, Jeffords carried 17 drop-in auto sear devices into the restaurant. Once the firearms had been converted to fire automatically, Martin intended to sell the guns to the undercover FBI agents again. However, before the transaction could be attempted, law enforcement officers surrounded the restaurant and arrested all three defendants. They also recovered each of the guns and auto sear devices.

Jelani Kazmende, 38, of Marietta, Georgia, Wiley Martin, 42, of Acworth, Georgia, and Robert Louis Jeffords, Jr., 62, of Forest City, North Carolina, were arraigned before Chief U.S. Magistrate Judge Russell G. Vineyard on federal charges of dealing firearms without a license, possession of machineguns, possession of unregistered firearms, and conspiracy. Members of the public are reminded that the indictment only contains charges. The defendants are presumed innocent of the charges, and it will be the government’s burden to prove the defendants’ guilt beyond a reasonable doubt at trial.