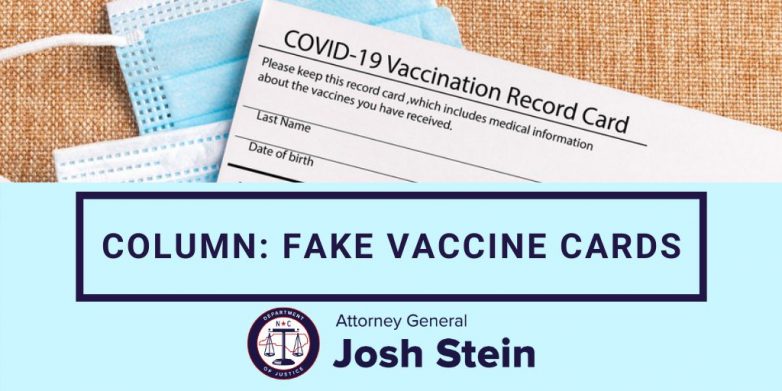 It seems some people will do anything to avoid vaccine mandates, and that includes buying or trying to produce a bogus CDC vaccination card. But attorneys general nationwide are cracking down on the counterfeiters, noting that the practice is not only illegal, it threatens the public health.

U.S. Customs and Border Protection officers in Memphis, Tennessee, recently made a strange but increasingly more common seizure: a package filled with counterfeit COVID-19 vaccination cards imported from China. More than 120 similar packages filled with thousands of fake cards, with typos and misspelled words, have been seized this year in Memphis alone.

As more municipalities, music venues, universities and employers institute vaccine requirements, many unvaccinated people are reevaluating their decision and are getting the COVID-19 vaccine. On the other hand, some are deciding to violate the law by creating fraudulent vaccine cards.

As chief legal officers for our states, we want all our constituents to understand that selling or using fake vaccination cards is illegal and can result in fines or jail time.
Fake cards across the country

Throughout the country, state attorneys general are responsible for enforcing consumer protection laws. Earlier this year, we led a bipartisan coalition of almost all of our fellow attorneys general in asking major e-commerce and social media companies, including Twitter and eBay, to prevent the sale of blank or fraudulently completed COVID-19 vaccination cards on their platforms. False and deceptive marketing and sales of fake COVID-19 vaccination cards likely violate consumer protection laws in many states, but more important, they severely threaten the health of our residents.

We’re in a nationwide COVID-19 wave caused by the delta variant that is largely affecting those who are not vaccinated. People who pretend they are vaccinated to enter businesses, workplaces, schools and other parts of society are putting themselves and others at risk of contracting a deadly virus.

As the pandemic continues and fake vaccination cards become more commonplace, attorneys general and other law enforcement agencies around the country have been forced to respond.

In Hawaii, the attorney general office arrested two travelers who allegedly violated the state’s COVID-19 mandates by arriving with falsified vaccination cards, a crime punishable by a $5,000 fine and/or up to a year in prison under state law. In California, a bar owner in San Joaquin County was charged with three felonies for allegedly selling fake vaccination cards to undercover agents from the state’s Department of Alcoholic Beverage Control.

Fraud is a crime

In addition to any state law violations, individuals forging or using fake vaccination cards are also violating federal law. In March, the Federal Bureau of Investigation released a public service announcement reminding the public that in addition to putting the card holder and others at risk of contracting COVID-19, using fake cards violates federal law prohibiting the unauthorized use of an official government agency’s seal, specifically the U.S. Department of Health and Human Services and the Centers for Disease Control and Prevention seals that appear on every legitimate vaccine card.

As attorneys general, we combat all types of fraud and scams in order to protect residents within our jurisdictions and across the country. Throughout the pandemic, we have worked to educate consumers so that they don’t fall victim to bad actors perpetrating common COVID-related scams. You should file a complaint with your state attorney general if you witness this kind of fraud.

We want our residents to understand that selling or using fake vaccination cards not only puts other people’s health and lives at risk, but it’s also illegal.