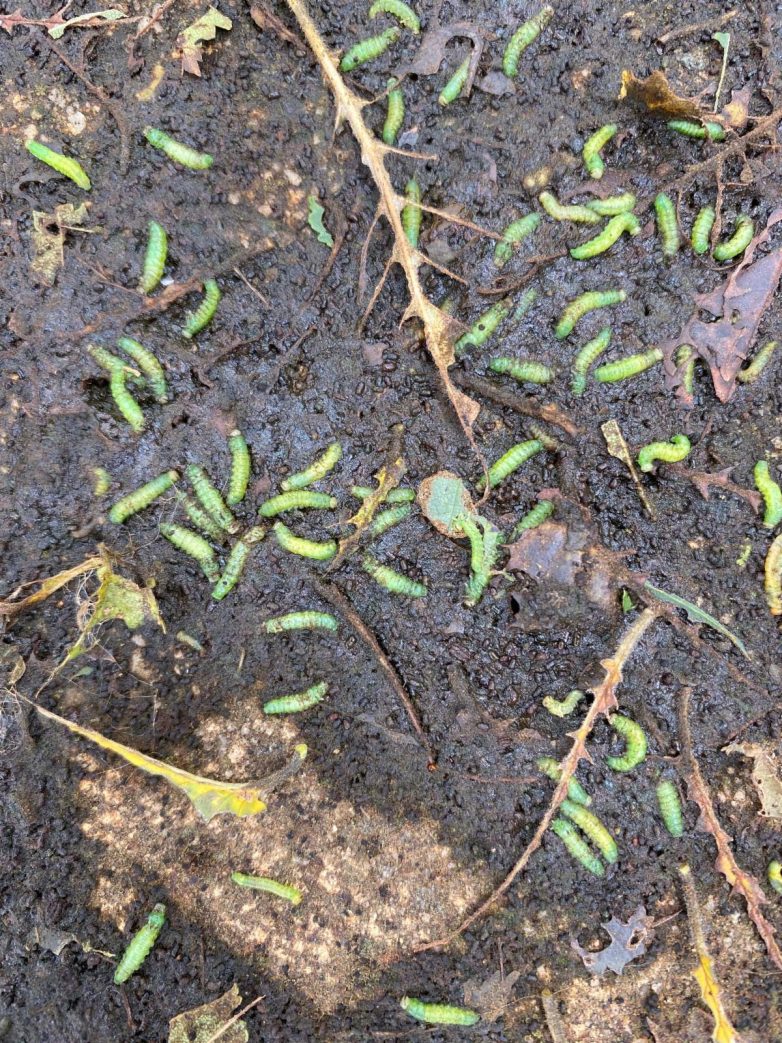 WESTFIELD – North Carolina’s newest invasive pest was recently found in Surry and Stokes counties by Elizabeth Edwards, the N.C. Forest Service’s Surry County assistant ranger. The detection was made just north of Pilot Mountain in the Westfield community. The elm zigzag sawfly had only been previously found in Québec, Canada in 2020 and Virginia in 2021. This pest is native to Asia but has spread to numerous countries outside of its native range.

“If you see a defoliating elm tree that you suspect is being impacted by this new invasive pest, note the location, try to safely photograph the insect and the leaves that have been eaten upon, and contact your local NCFS county ranger,” said Agriculture Commissioner Steve Troxler. “As North Carolina’s list of invasive species gets a little longer, you can help us keep our forests healthy and thriving by reporting these bad bugs.”

Although small, the elm zigzag sawfly can cause significant damage to elm trees due to their ability to rapidly increase population size, said Brian Heath, NCFS forest health specialist. Elm zigzag sawflies can have multiple generations per year, as females reproduce without mating, which accelerates their population growth.

Typically, defoliation from an insect does not result in long-term health impacts to a tree. Many native caterpillars defoliate trees in the spring and fall, and trees are generally able to recover. However, it is too early to determine if that is the case with this insect, Heath said. As with the invasive spongy moth, repeated defoliation of a tree can result in weakened or stressed trees and in some cases, death.

Sawflies are a type of wasp that are unable to sting, making them harmless toward people and animals. They are named for their saw-like appendage used for egg-laying, and as young larvae they leave a “zigzag” pattern in the leaf when they feed. It is a small, green, caterpillar-like larva less than half an inch long and feeds exclusively on the leaves of elm trees.

Like other sawflies, adults are strong flyers which can lead to further spread from these established sites. Homeowners within infested areas should take caution to prevent spreading the sawfly as they can hitchhike on plants or soil, or as cocoons attached to various objects, Heath said.

People who suspect there is an infested tree in an area near them should contact their NCFS county ranger. To find contact information for your county ranger, visit https://www.ncforestservice.gov/contacts.