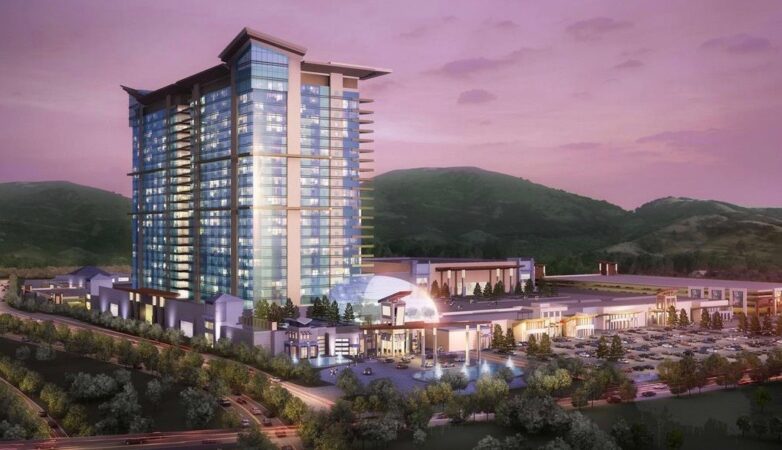 But nearly 30 years of research — and North Carolina’s recent history — suggest average homeowners in Cleveland County shouldn’t expect a dramatic bump in home values from the casino. Nor, studies suggest, should families not named ‘Neisler’ expect a huge boost to their incomes.

Neisler has been one of the casino project’s most prominent local supporters. Last month he defended it at an online congressional committee hearing, calling it a potential economic engine for a county where 19% of residents now live beneath the federal poverty threshold.

“Obviously those kind of projects don’t come around but once in a millennium for our area, you know?” Neisler told Policy Watch in an interview last week.

But the casino could also be a once-in-a-millennium financial opportunity for Neisler and his family.

During last month’s hearing, Rep. Mark Walker (R-NC) questioned Neisler about potential conflicts of interest in his support of the project. Neisler did not disclose his family’s millions of dollars in land holdings near the casino site, just off I-85 on the way into Kings Mountain.

Neisler Brothers Inc. owns 865 acres of land on five parcels within a mile of the site. Some of that property is leased by a mining company, but most of it is undeveloped. County land records show Neisler’s family company is, by far, the largest single owner of undeveloped land around the proposed casino site.

At the corner of Mountain Street and Battleground Avenue in downtown Kings Mountain, banners announce the “Historic Kings Mountain Area.” The city has been trying, with mixed success, to rebrand and revitalize the area. A half-dozen storefronts in the small commercial strip are now vacant, their doors locked and chained. Just around the corner, on West Mountain Street, is the narrow glass-doored office of Neisler Brothers Inc.

The Neislers call it a small family holding company. But the company’s land holdings are anything but small, according to county tax records. They include a 783 acre parcel within a mile of the new casino site. Current tax value: $4.2 million, up slightly from $3.9 million in 2012.

Neisler personally owns a 4.6-acre parcel about five miles from the site. The current tax value of that parcel is $23,013. County tax records show the taxes have not been paid on the property since 2014.

The tax value of several other smaller parcels owned by the family’s company have not changed since 2012:

Two properties have increased in value:

Right now the land Neisler and his family own in the area is largely undeveloped, much of it without road access. It’s not near any major retail or entertainment areas or anything that might lure tourists to the area. If the casino moves forward and is a success, that will quickly change, making the land much more valuable.

In the interview with Policy Watch last week, Neisler said he doesn’t consider that a conflict of interest. His family has not discussed selling the land to the Catawba tribe for the casino or any related development, he said.

Any casino-related development in the area could take between five and seven years to reach the land his family owns, Neisler said. While his land could increase in value, he said, so could other properties in Cleveland County.

“My house even in town is going to go up in price, so that’s a conflict of interest” Neisler said. “But that’s kind of looking in futuristic terms and saying, ‘Hey, something?two miles down the road is going to be worth a whole lot because this is coming in.’ Well, it could and it couldn’t. I don’t know.”

The National Association of Realtors does know home values. It is literally their business.

The group’s 2013 study of communities with casinos concluded “the impact on home values appears to be unambiguously negative.”

Casinos in rural areas tend to have more positive effects on income and fewer negative effects on home prices than those in urban areas, the report said. But that’s true primarily of “destination” casinos that offer the only such experience in a large area, according to the report.

The more casinos in a region, the less positive the impact. The new resort, operated by the Catawba Indian Nation, would be the third Indian casino in western North Carolina. The Eastern Band of Cherokee Indians already operates two casinos, in Cherokee and Murphy.

Neisler, though, is optimistic about the town’s fortunes. He pointed to an economic impact study from the firm London & Associates that projected the casino could directly create around 2,600 new jobs and indirectly create nearly 1,000 more. The study also predicted $5.1 million a year in local sales, residential and property taxes with labor income exceeding $100 million annually.

[Note: According to Linked In, the firm London & Associates is a consulting firm headed by a Jim London, a professor emeritus in economics at Clemson University. While the economic impact study referenced by Neisler is also referenced in a Final Environmental Assessment of the casino project submitted by the Catawba Nation to the Department of Interior, Policy Watch has not yet been able to obtain a copy of the study. In addition, two comments from the Eastern Band of Cherokee Indians attached to the environmental assessment state that “The London & Associates Economic Impact Study is not provided.”]But the National Association of Realtors study also casts doubt on the transformational effect of jobs created by casinos.

“Casinos generate jobs, but many of the jobs created by the introduction of a casino are reported to be minimal wage/low paying opportunities, with a few experienced gaming professionals filling the management positions,” the study said.

The negative effects of casinos — particularly clusters of casinos — are clear but difficult to measure, the report said. Communities often fail to take them into account.

“Major social costs are frequently mentioned as associated with casinos—e.g., increased bankruptcies, crime, traffic, and congestion among others,” the report said. “These costs are frequently excluded from cost/benefit evaluations due to measurement problems. The inclusion of the social costs along with possibly other negative externalities reduces the net level of economic benefits from a casino or may even turn them negative.”

Neisler said he’s heard peoples’ concerns about the potential negative effects. The city and the Catawba will do what they can to combat them, he said — but the economic opportunities for the town make it worth the risk.

One such opportunity, Neisler is quick to point out, is an energy deal struck with the Catawba that could be worth millions to the city.

Kings Mountain buys electric power wholesale on the open market and sells it to residents. The profits generate about $2 million a year for the general fund in a town whose total budget is about $48 million. That helps fund town services and keep the tax rate low, Neisler said.

The town has negotiated with the Catawba to be the “utility of choice” for the tribe’s resort.

“On a hot day in July, we use maybe 40 megawatts of electricity for the entire town,” Neisler told Policy Watch.

A busy casino, hotel, restaurants and the surrounding development could nearly double that, Neisler said. Beyond the jobs and tax base increase, that kind of consumption could grow to double the town’s electrical system — and its profits — in five to seven years.

“All available evidence points toward a substantial improvement for our city’s well-being on almost all measurable dimensions,” he wrote to city residents in a newsletter last month.

But decades of independent research on casinos and the fortunes of the communities around them don’t back that up.

“They just want to believe the hype.”

A 2016 study by Agribusiness and Applied Economics faculty at North Dakota State University examined the relationship between casinos and economic growth of counties in the 48 contiguous U.S. states from 2003 to 2012.

“Specifically, we compared the effects on real per-capita personal income and job growth rates of the counties with and without casinos,” wrote the study’s co-author, Siew Hoon Lim. “We found that the effects of casinos on economic growth to be positive but relatively small.”

On the job side, casino expansion was estimated to have increased the 10-year salary job growth rate by less than a percentage point.

In Cherokee County, where the Cherokee Valley casino has been operating in Murphy since 2015, the percentage of households living below the federal poverty threshold is still about 19%  — essentially the same as Cleveland County. The state average is 13.6%.

Jackson and Swain counties have been home to a thriving and expanding Cherokee casino for more than 20 years. But the latest census data shows they are not significantly better off than Cleveland County. By some measures, they’re doing worse.

Jackson and Swain also have tourist attractions unrelated to their casinos — the Blue Ridge Parkway, Great Smoky Mountains National Park and whitewater rafting on the Nantahala River. Cleveland County doesn’t enjoy those advantages and would be leaning on the casino as its primary lure.

Deborah Brown, 50, doesn’t own hundreds of acres that could make her millions should the casino be built.

Like a lot of other lifelong residents of Kings Mountain, she’s spending a lot of time these days considering what could be lost.

The town may not be a thriving metropolis, she said. But it does have natural beauty and small town character — assets that would likely be diminished by a casino.

“Right now they’re trying to bring the downtown back,” Brown said. “They’ve got a couple of nice shops and restaurants that have opened up. A casino and resort — it’s going to kill the small business around here.”

A lot of people in town don’t want to criticize the project because they believe it will create badly needed jobs, Brown said.

“But how many of those jobs are going to be local?” she said. “How many people are they going to bus in for those jobs? And what are the negatives going to be? Nobody wants to ask those questions, they just want to believe the hype.”

Beal is president of Ambassador Baptist College in Shelby and one of the leaders of a grassroots opposition to the casino. Last year he helped gather more than 1,200 signatures against the project.

“We were able to get that many signatures in a week and a half with not much effort,” he said. “So obviously, not everyone here is sold.”

They brought the petition to the Cleveland County Commissioners and the Kings Mountain City Council, and even took out a full page ad in the Shelby Star newspaper. It didn’t seem to make much difference to local elected leaders already enamored with the idea of the casino, he said.

The churches in the region will end up picking up the pieces, Beal said.

“I’m obviously coming from a strong faith perspective,” Beal said. “I believe, as the Bible says, that the love of money is the root of all evil. And this is an industry that is built on the love of money. I don’t doubt our leaders’ Christianity. But I do doubt their discernment.”