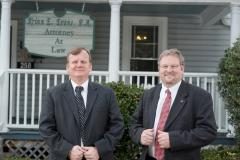 HENDERSON COUNTY — After a behind the scenes scramble. the hearing to release Krinn Evans as Word of Faith member Justin Covington’s defense counsel was held in Hendersonville at 1:30 p.m. Tuesday. District attorney Ted  Bell had previously informed those involved Monday that the hearing was canceled.

This would have+9 been the second time Bell’s administrative duties have tried to delay the hearing. The first hearing fell apart as shown iun the emails below.

The notice of hearing for the motion to withdraw in the Justin Covington case is for Feb. 16.  I’m supposed to be out of town that day so I wanted to see if you would be ok with doing it on a different day.  Also, I called the Clerk’s office in Buncombe to see if it had actually been calendared and they still haven’t even entered the case into their system, nor had they calendared anything on it.  Our Clerk, Steve, is going to reach out to their Clerk to see if he can’t get them moving on that.  So, if you are in agreement with doing it on a different day, my thought was to have an email discussion with Judge Pope, you, and I on when to set it for hearing.  Please let me know your thoughts.

Please except my sincerest apologies for our not being in court for the motion in this matter today.  I had spoken with the Buncombe County Clerk’s Office several times about the calendaring of this hearing, and was told by their Superior Court Division that their interpretation of the change of venue order was that it was only a change of venue for trial, and not for any other matters.  They have refused to key the file into their system- I even went their in person to talk to them about it and noted that the entire file is simply sitting in a metal bucket on a window sill in the Clerks Office.  I spoke with them s as recently as two days ago, and each time they led me to believe that the Motion to Withdrawl [sic] noticed on for today was not calendared and would not be heard in Buncombe County.  I had also emailed Your Honor on 8 January asking if this matter was to be heard on today’s date and whether I needed to procure a commission from Mr. Hoke.  I did not receive a response to that email, which also reinforced my understanding that this matter was not on any calendar.  I reached out to Mr. Evans on 7 February and explained the problem we were having with the Buncombe Clerk’s Office’s interpretation of the Change of Venue order and my understanding that this matter had not been calendared.  Additionally, I was originally supposed to be out of town today, and asked Mr. Evans, based on those two facts, if it would be ok to have the hearing at a different time.  He agreed, but I did not do a motion to continue based on the information I was given that the matter had not and would not be calendared.  Hence, Mr. Evans’s absence today is entirely my fault, and I very much regret wasting the Court’s time.  I have been drafting an email to the defense attorneys in the four matters that were transfered [sic] to explain the problem with Buncombe’s interpretation of the order and to get their approval to email Your Honor, cc’ing them, to explain the situation and ask for Your Honor’s clarification of the order.  Had I remotely suspected that the matter would possibily [sic] be calendared today I certainly would have been there.

In the State of North Carolina versus Justin Brock Covington, the defense attorney, Krinn Evans, made a motion to withdraw representation. The motion for withdrawal of counsel was because the office of Krinn E. Evans, P.A. had associated former case prosecutor ADA Garland F. Byers, Jr.  on January 1, 2018 as an employee of that firm. Prior to leaving the district attorney’s at the end of 2017. Byers had been directly responsible for the prosecution of Justin Brock Covington while serving as an Assistant District Attorney. Evans argued there is a conflict of interest  (or imputed disqualification) that cannot be resolved.

Lawyers are governed by the NC STATE BAR. The NC State Bar publishes ethical rules that attorneys must comply with in their practice of law. These rules are known as the Rules of Professional Conduct.  Rule 1.10 applies to this situation and provides as follows:

(a) While lawyers are associated in a firm, none of them shall knowingly represent a client when any one of them practicing alone would be prohibited from doing so by Rules 1.7 or 1.9, unless the prohibition is based on a personal interest of the prohibited lawyer, including a prohibition under Rule 6.6, and the prohibition does not present a significant risk of materially limiting the representation of the client by the remaining lawyers in the firm.

Evans had reported that he and Byers had discussed the ethical problem of Evans continuing to represent a defendant in the WoFF as a court appointed attorney when Byers joined the firm.

District Attorney Ted Bell objected to Evans release stating that this was the only case Evans had asked to be released. He then cited other cases that had been set for trial by Byers and Evans had not objected.

Evans countered by stating that since, that Byers had left the DA’s office, he had received very generous offers from Mr. Byers’ replacement in cases that had been for trial while Byers was in charge of Superior Count.

On several occasions Bell stated that this motion was purely because Garland Byers was running against him for the office of district attorney. Bell later stated:

“This is purely a political ploy. Having someone in the firm represent a Word of Faith member would be politically damaging.”

Judge Pope allowed Justin Covington to express his feelings about a possible change.

“I have gained confidence in Mr. Evans and I wish him to be retained as my counsel.”

After arguments of counsel, Judge Pope disagreed with Mr. Bell and ruled that Evans would be released as counsel for Mr. Covington. Sometime prior to the hearing yesterday, Judge Pope had already arranged for Covington to have new counsel, Brian Gulden. Gulden was present in the courtroom.
DA Bell then informed the judge that there would be no movement on the remaining Fenner cases as he had not received the SBI or FBI reports.