On the Opening Night at Harris Speedway, Bruce Wayne Givens – the driver of Car #5 in the Front Wheel Drive Division – dedicated his racecar to three of his fallen friends – Ethan Calton, Jarvis Tate, and Daryl Price – and their families who were in attendance.  The names of each man were prominently displayed on Givens’ vehicle.

In speaking with the families, Givens also planned to dedicate the first lap of his season to Calton, Tate, and Price.  The dedication lap was scheduled to occur immediately after nightfall. 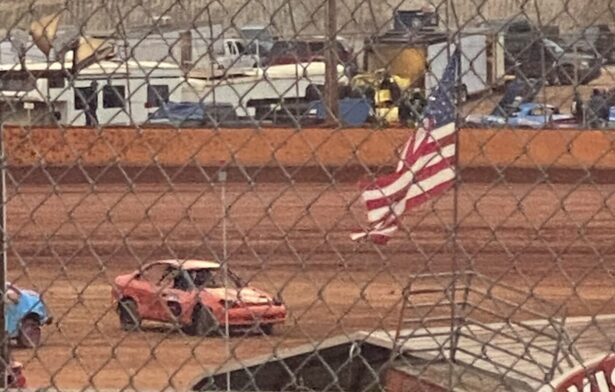 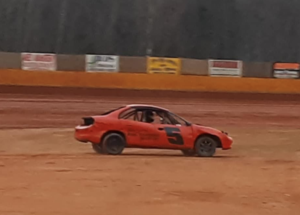 In speaking with Givens, he provided a glimpse into the significance of his relationships with Calton, Tate, and Price and explained how the number “5” he selected for his racecar serves as a constant reminder of the difficulties that he and his friends attempted to help each other overcome.

Givens, Calton, Tate, and Price had all experienced the overpowering grip of addiction and the legal entanglements that followed.  According to Givens, they had all made repeated efforts to change their lives by ending the cycle of addiction.

In what Givens described as a situation that feels increasingly hopeless, Givens also explained the concerns that mounted with each criminal conviction that frequently resulted from decisions made during his addiction.  In North Carolina, each felony conviction increases a defendant’s sentencing level, which results in each subsequent conviction carrying significantly more severe legal penalties.

After years of being wrought by addiction, Givens had been convicted of enough charges that his sentencing level had reached the maximum level – Level 5.  At this level, any subsequent charges would likely result in Given’s spending the majority of his adult life in prison.

Knowing the consequences of another conviction, Givens made a final effort to stop using drugs and turned to racing as an alternative.  With the support, guidance, and encouragement of Jared Dysart, Keylon Tate, Austin Franklin, and Justin Franklin, Givens was able to escape the addiction cycle and legal problems that inevitably follow.  The number “5” on Givens’ car – the sentencing level he had reached – is a way of reminding himself of the misery that resulted from his addiction.

Over the past year, Givens remained close with Calton, Tate and Price and encouraged them to race with him.  Both Calton and Tate expressed interest in doing so and took steps toward entering the Front Wheel Drive Division with Givens.  In a sudden and devastating series of events, however, each of these men were fatally shot in three (3) different incidents involving drugs and law enforcement – the very situation they were attempting to avoid.  As the families continue seeking answers, the exact circumstances surrounding, and individuals responsible for, Calton, Tate, and Price’s deaths are currently under investigation. 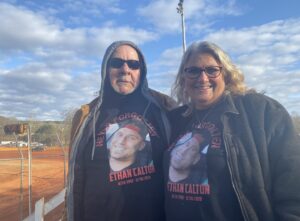 Saturday night was a particularly somber occasion.  As the families surrounded the racetrack wearing t-shirts with pictures of their lost love ones, Givens’ racecar entered the racetrack brandishing the names of Calton, Tate, and Price.

The sun had just set, stadium lights illuminated the racetrack, and Givens’ racecar was lined up next to the other drivers in preparation for his first lap dedicated to Calton, Tate, and Price.   At that moment, however, the track lights suddenly failed and darkness covered the speedway.

Although the lost light prevented Givens from visually displaying their support for Calton, Tate and Price, the darkness, calm, and accompanying silence seemed to amplify that voice that suddenly emerged from the loudspeaker paying tribute to these three men, their friends, and family.

As the crowd listened in solidarity, the names of Ethan Calton, Jarvis Tate, and Daryl Price lingered over the stadium.  The serendipitous fading to black both sharpened the focus on the moment and served to punctuate the significance of Calton, Tate, and Price’s lives, as well as the profound impact of their deaths.

In memory of Ethan Calton, Jarvis Tate, and Daryl Price.  You will not be forgotten.