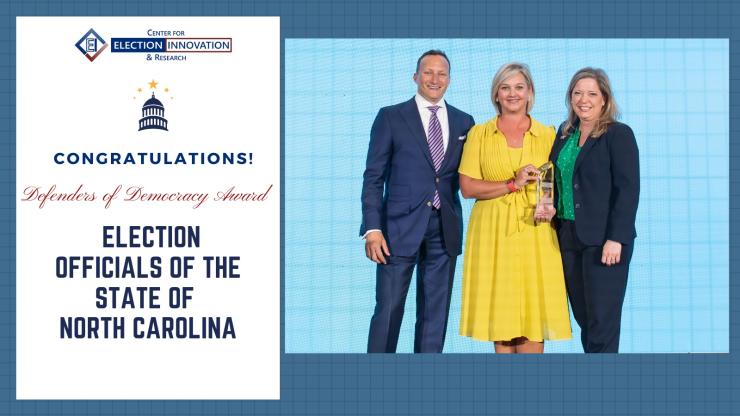 North Carolina elections officials recently received a “Defender of Democracy” award for their work serving voters before, during, and after the 2020 elections.

The Center for Election Innovations & Research (CEIR), a nonprofit organization working to build voter trust and confidence, recently presented the awards to North Carolina and elections officials from eight other states.

According to CEIR, the 2022 Defenders of Democracy Awards were designed to recognize Americans who courageously stood up against efforts to undermine the democratic process. Other states honored were Arizona, Colorado, Florida, Georgia, Michigan, Nevada, Pennsylvania, and Wisconsin. Individual awards were given to Steve Pershing as a volunteer for the Election Official Legal Defense Network, Chris Krebs and Matt Masterson for their work with the Cybersecurity and Infrastructure Security Agency, Linda So and Jason Szep for their investigative reporting, and Judge Thomas B. Griffith (ret.) and Judge J. Michael Luttig (ret.).

“These awardees showed exemplary courage and leadership – under enormous pressure – with the highest level of professionalism, commitment to democracy, and dedication to public service,” said David Becker, CEIR executive director and founder.

Karen Brinson Bell, executive director of the State Board of Elections, and Michella Huff, Surry County elections director, accepted the award at an event last month in Washington, D.C.

“In North Carolina, our 100 county boards of elections effectively conducted the 2020 general election, with the highest turnout in state history and during a global pandemic,” Brinson Bell said. “We thank CEIR for the award, and we stand with elections administrators from across the United States who work hard every day to ensure accessible, secure, and fair elections.”