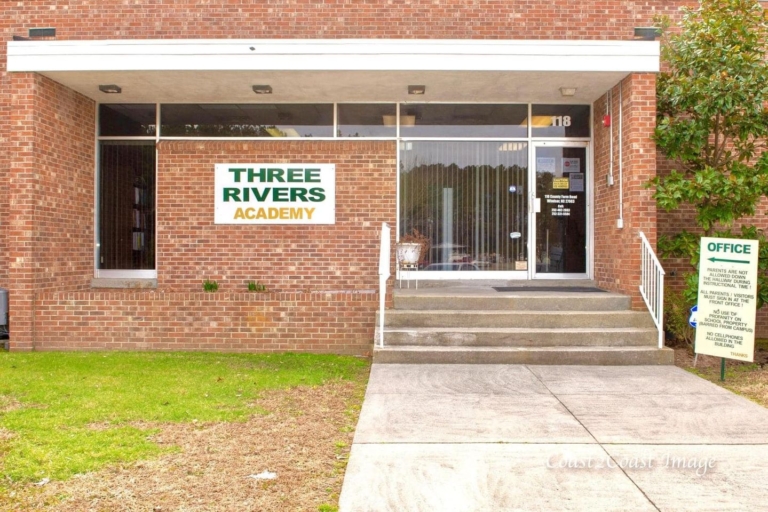 The State Board of Education ordered Three Rivers Academy in Bertie County to close Friday, April 8.

In a stunning move last week, the State Board of Education (SBE) ordered the “immediate” closure of Three Rivers Academy charter school, contending its continued operation poses an “immediate threat” to students, school employees and the general public.

The move sends the parents of a reported 85 students attending the low-performing school in Bertie County scrambling to find new schools just weeks before the school year ends. Students from multiple counties attend the school.

“Folks it’s important to know that we as a state board never relish the idea of closing a school but if forced to do so we would prefer to do that at the end of the school year,” said SBE member Amy White, chairwoman of the state board’s Education Innovation and Charter School Committee.

The state board voted to revoke Three Rivers’ charter in January following a lengthy state investigation that found academic, fiscal, and governance shortcomings.

White didn’t give specifics about the “immediate threat” or what led the board to order the school to close Friday instead of at the end of the school year.

She offered this explanation during a state board meeting Friday afternoon:

“Today the state board has found that the immediate closure is necessary to protect the educational needs, welfare and rights of students currently enrolled at Three Rivers Academy and to safeguard the public and financial assets, which are in the school’s possession,” White said, explaining that state law gives the board the authority to close a school under those circumstances.

Bertie County Schools will become Three Rivers’ “fiscal agent,”  White said, and will oversee school finances and close out any remaining business the school has including ensuring that staff, teachers and vendors are paid.

“All monies, all documents, records, computers, buses, automobiles all other assets purchased with public funds become the property of the Bertie County Schools,” White said.

Bertie County Schools Superintendent Otis Smallwood told Policy Watch in January that the district pays for about 20 students who attend Three Rivers. He said the small, rural district of nearly 2,000 students could easily absorb local students attending the school if it closes.

Three Rivers is managed by Torchlight Academy Schools, LLC, which is owned and operated by embattled Raleigh businessman Don McQueen. The for-profit Education Management Organization (EMO) also managed Torchlight Academy in Raleigh. The state board also revoked that school’s charter and ordered it to close at the end of the school year due to fiscal and governance concerns and missteps in the school’s special education program. Torchlight Academy’s board of directors has appealed the charter revocation. The state board will hear the appeal later this month.

A former Three Rivers teacher told Policy Watch in January that McQueen padded enrollment numbers, paid families so students would attend class, and took other extreme measures to ensure state per-pupil funds kept flowing to the troubled charter school. The teacher’s allegations were corroborated by a former principal of the school, Hans Lassiter. Lassiter worked at the controversial Bertie County charter school during the first half of the 2020-21 school year.

Meanwhile, the state board agreed Friday to allow Torchlight Academy to “formally” cut ties with McQueen’s EMO. That brings the school into compliance with charter agreement, which called for it to be managed by McQueen’s organization.

The Torchlight board hired veteran educator Randy Bridges to lead the school while its works through the appeal process. Bridges was most recently interim superintendent of Chatham County Schools. He has also served as superintendent of districts in Alamance and Orange counties, among others.

As Policy Watch previously reported, the Bridges hire comes a month after the Torchlight board unanimously agreed to accept McQueen’s resignation as executive director of the school and to “terminate the employment” of McQueen’s wife, Cynthia McQueen who was principal and superintendent of Torchlight.

The board also terminated the McQueens daughter, Shawntrice Andrews, director of the school’s exceptional children program, and her husband Aaron Andrews, a teacher’s assistant. It also ended a lucrative janitorial contract the McQueens dealt their son-in-law to clean a portion of the school used for a federally funded after-school program.

N.C. Department of Public Instruction records show that the McQueens paid their son-in-law $20,000 a month to clean a portion of the school being used by the federally funded 21st Century Community Learning Center program, Policy Watch previously reported. Such centers provide children in high-poverty, low-performing schools academic help during non-school hours. Aaron Andrews’ custodial firm, Luv Lee Sanitation, was responsible for cleaning the six classrooms and common areas used exclusively by the program. The contract was signed by Cynthia McQueen.

A recent audit shows that the McQueens, who were both employed by the school and owned the firm that managed it, gave themselves hefty raises. Each was paid $160,000 during the 2020-21 school year, a $60,000 increase over the $100,000 each reportedly received the year before.