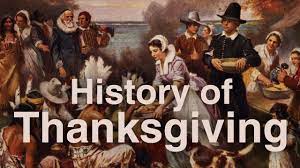 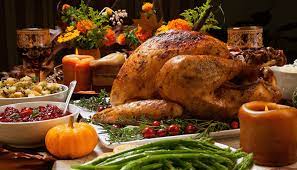 It’s Thanksgiving Eve here in America. A time of grocery store craziness, cooking, cleaning, and preparing for guests, or to travel, for most of us.  Thanksgiving holiday….how and when did it all start?

In October 1621 the event that Americans commonly call the “First Thanksgiving” was celebrated by the Pilgrims after their first harvest in the New World. This feast lasted three days and was attended by 90 Wampanoag Native American people and 53 Pilgrims (survivors of the Mayflower). Less widely known is an earlier Thanksgiving celebration in Virginia in 1619 by English settlers who had just landed at Berkeley Hundred aboard the ship Margaret.

In 1789, George Washington declared Thursday, Nov. 26, a Thanksgiving holiday, but only for that year.

A 19th century author, poet and magazine editor named Sarah Josepha Hale, who was highly patriotic, read about the 1621 feast of the Pilgrims and became captivated with the idea of turning it into a national holiday.

She began a lobbying campaign to persuade President Abraham Lincoln to make Thanksgiving an official annual holiday, using her magazine to build public support by writing an editorial every year starting in 1846. She also sent letters to all governors in the United States and territories.

In 1863, Lincoln did set Thanksgiving as an official holiday to be celebrated on the fourth Thursday of November every year.

Since 1863, Thanksgiving has been observed annually in the United States. The holiday superseded Evacuation Day, a de facto national holiday that had been held on November 25 each year prior to the Civil War and commemorated the British withdrawal from the United States after the American Revolution 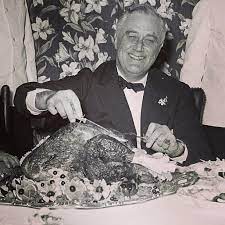 On June 28, 1870, President Ulysses S. Grant signed into law the Holidays Act that made Thanksgiving a yearly appointed federal holiday.

In 1939, President Franklin D. Roosevelt agreed to move the annual Thanksgiving holiday to the third Thursday of November to help the economy by making the Christmas shopping season a little bit longer. There was so much opposition to the move that two years later he changed it back to the fourth Thursday in November.

From 1942 onwards, Thanksgiving, by an act of Congress received a permanent observation date, the fourth Thursday in November, no longer at the discretion of the President.

It is however not without controversy. The Wampanoag Indians today remember the Pilgrims’ entry to their homeland as a day of deep mourning, rather than a moment of giving thanks. They felt like their people’s history, as they understood it was being misrepresented.

It’s important to know that for many Native Americans, Thanksgiving is a day of mourning and protest since it commemorates the arrival of settlers in North America and the centuries of oppression and genocide that followed.

Also, in 1801 Thomas Jefferson refused to endorse the tradition when he declined to make a proclamation. For Jefferson, supporting the holiday meant supporting state-sponsored religion, which he was against.

Covid caused all of us to rethink Thanksgiving gatherings. We were told not to gather, to wear masks, to eat outside, to only congregate if vaccinated. So many things have changed in the past few years.

We now know that vaccines do not guaranteed immunity from Covid much like flu vaccines. Rule of thumb is if you are immunocompromised then you must make your own decisions about gatherings.  No judgments just do what is best for you.

If you are more comfortable wearing a mask then by all means do so. If you are feeling sick then do not expose others. Common sense rules apply here not only at Thanksgiving but all year long.

Thanksgiving individually is a time for most to reflect on things and people we are most thankful for. This year in particular being thankful for just being here at all seems appropriate.

How you celebrate it may be different and circumstances may not be as good for some as others but being thankful does not require special foods or money. It does not require going anywhere.

Stop, and take as deep a breath as possible and look at the sky. You are here. I am here and I am thankful for both those things.