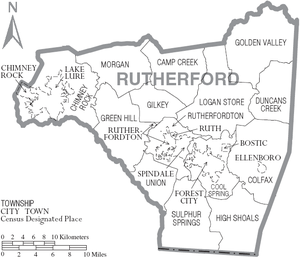 Nearly a year after receiving the first portion of American Rescue Plan Act funds, Rutherford County has a tentative plan for how to spend the COVID-19 recovery money.

During a Monday meeting, the Rutherford County Board of Commissioners approved using more than $3 million of the county’s roughly $13 million in ARPA funds to match the state’s Growing Rural Economies with Access to Technology, or GREAT, grant, which provides funding to expand broadband access throughout North Carolina.

“Trying to get broadband service to the unserved and underserved portions of the community is highly important,” County Manager Steve Garrison said.

According to census data, 70.2% of Rutherford County households have a broadband internet connection. That’s well below the state’s percentage of 80.7% of households with a connection.

With GREAT grant applications due to the state by April 4, Monday’s meeting was the last chance for commissioners to approve using ARPA funding for a GREAT grant match. The next scheduled Rutherford County Commission meeting is also April 4.

Commissioners also put Rutherford’s remaining $10 million ARPA in funds in the lost revenue category — one of the four acceptable buckets for ARPA expenditures, according to the U.S. Department of the Treasury. They can allocate funds deemed “lost revenue” to specific projects later.

“Before allocation of this $10 million, a plan of how that $10 million would be allocated would still come back to you with line item detail,” county Finance Director Paula Roach said during Monday’s commission meeting.

The county will hire an external grant management team to create a plan for the remaining ARPA funds. Garrison said he hopes to have the grant manager on board to work with commissioners by April or May tentatively.

During a Feb. 7 interview with Carolina Public Press, Garrison did not speculate what, other than broadband expansion, the county’s federal COVID recovery money would be spent on when a grant manager is hired.

Coming up with a plan

Before this week’s vote, Rutherford County was one of only four Western North Carolina counties without a plan in place for its federal COVID recovery money.  The three others — Mitchell, Madison and Avery — received ARPA allocations at least $8 million less than Rutherford.

Garrison said in a Feb. 2 email to Carolina Public Press that Rutherford had not established definitive ARPA plans because the county did not have the administrative capacity to manage the funds internally.

After a recorded interview with Garrison and several other WNC county managers, CPP published an article about WNC counties without ARPA plans on Feb. 14. Since the article’s publication, Rutherford has presented a tentative plan for ARPA funds and sent out a formal request for proposals for an ARPA manager.

Garrison referenced that CPP article several times, calling it an “unfortunate news release,” before introducing the resolution for a tentative ARPA plan during Monday’s meeting.

“I generally don’t make it a practice of offering a public rebuttal to news stories that I believe warrant correcting, but in the case of the recent article that was released by a reporter with the CPP, I’m going to make an exception,” he said.

Neither Garrison nor any other Rutherford County official has reached out to CPP regarding his assertion that the article was inaccurate in some respect.