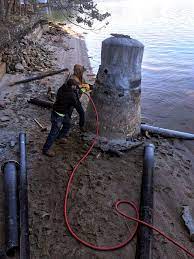 Lake Lure’s long and costly list of sewer repairs got a little shorter with the help of federal COVID recovery money.

Shortly after receiving its first installment of American Rescue Plan Act funds, the Lake Lure Town Council elected to use all of its roughly $368,000 to fix more than 60 manholes in and around the 700-acre lake in Rutherford County.

Fixing the manholes, openings that lead to underground sewer pipes, has been a top priority for the county for more than two years, Lake Lure Mayor Carol Pritchett said.

“These manholes are what connects each property on the sewer system to the sewer lines that run through the bottom of the lake to the wastewater treatment plant,” Pritchett explained.

“(The manholes) are aged, and they were leaking.”

Lake Lure, which plunges to 100 feet at its deepest point, produces enough water pressure to prevent sewage from leaking into the lake through the underwater sewage system.

Rather, lake water has been leaking into the sewage lines.

“That’s why I take my grandchildren to swim in the lake every day that they’re here for 12 hours a day.”

However, this type of leakage presents a different issue, said Brian Houston from Labella Associates, the engineering firm the town of Lake Lure hired to handle sewer repair plans.

When nonsewage runs through Lake Lure’s sewer lines and ultimately deposits at the town’s wastewater treatment facility, a different type of treatment must be performed on the water.

“Most wastewater treatment plants operate with a biological population of bacteria to treat the sewage, and that bacteria needs to be fed and sustained,” Houston said. “If you can’t feed them a decent concentration of waste, … then you can’t keep them sustained, and you can’t treat (the sewage.)

Though the leaks have caused Lake Lure’s water treatment facility to operate less efficiently than ideal, the plant has continued water treatment even with massive amounts of lake water. Houston estimated 450,000 to 600,000 gallons of liquid has been flowing into the facility per day. That’s two times more than the average daily sewage for a town the size of Lake Lure, which census data shows has a population of roughly 1,300.

“Somewhere between 65% to 80% of the water coming to the treatment plant is lake water,” Houston said.

To prevent this leakage, the town worked with Labella to fill pipe cracks with a polyurea coating, similar to coating put on garage floors.

Manhole repairs began in late November, when the town lowered the lake’s water levels, and will soon be complete, with only three more to repair, Pritchett said.

While the leaks are not currently a concern for public safety, Houston said if the system weren’t repaired, catastrophic and expensive damage could be around the corner.

Both Houston and Pritchett attribute Lake Lure’s deteriorating sewer system to its age. Built in the 1920s before the lake was filled, the sewage system consists of massive underwater cast-iron pipes that deliver sewage from more than 600 homes and businesses to the wastewater plant, which sits east of the dam.

A sewer system like Lake Lure’s wouldn’t be installed today, Houston said, because having sewer pipes underwater makes it tremendously difficult to access them for repairs if a large-scale leak occurs and sewage enters the lake.

When the system was built, limited access to pipes wasn’t as grave a concern as it is today. The Clean Water Act, federal legislation passed in the early 1970s that enforced sewage treatment, postdated the installation of the town’s sewer system.

“Trying to get into the mind of a developer from 100 years ago, I would imagine they were thinking, ‘Well, we could just dump the sewage into the lake, but we’re making a real nice lake, and people don’t want floaters in their lake, so maybe we should run it downstream below the dam,’” Houston said.

“Once it went through the dam, it was dumped into the (Broad) River.”

Sparse access to the underwater pipes has meant few improvements to Lake Lure’s sewer system. Houston said the only repair he knew of was about 15 years ago, when the town repaired sewer joints, devices that connect pipes.

The sewer system isn’t the only part of Lake Lure that has been neglected.

In March 2018, Carolina Public Press reported the N.C. Department of Environmental Quality and its predecessor agencies had warned Lake Lure officials for more than a decade that they were badly behind on inspections and maintenance for the dam. The town has since addressed these issues.

The solution for Lake Lure, Houston said, is installing a new sewer system, which is currently being designed by Labella and projected to cost more than $60 million.

“We have a long-term plan to replace the sewer system in six different phases, but it will probably take over 10 years to do for a variety of reasons — probably among the first, funding,” Pritchett said.

To pay for the six-phase sewer project, Lake Lure increased its customer sewer rates, took out a $12 million revolving loan and received a $500,000 state-supported grant.

The first phase, which Pritchett said the town hopes to begin in the next year, will consist of expanding the sewer system from the dam northeast to Sunset Cove and southwest to the intersection of U.S. Highway 64 and State Route 9.

“It is sort of a pay as you go,” Pritchett said, adding that the town will work to secure funding for the project’s upcoming phases while completing those already paid for.

But the six-phase project leading to a state-compliant sewer system could not begin until Lake Lure fixed the immediate issues — namely the damaged manholes, which Houston said should hold the town over until a new sewer system is built.

The manhole rehabilitation, which the town expects to cost a total of $610,000, is being paid for mostly with American Rescue Plan Act money. The rest will come out of the town’s fund balance, Pritchett said.

Had the county not received ARPA money, it would have had to look for funds elsewhere through grants or loans.

“It was just providential when the ARPA money came along. We weren’t expecting it — nobody was expecting it, of course,” Pritchett said.

“It just could not have been better timing.”