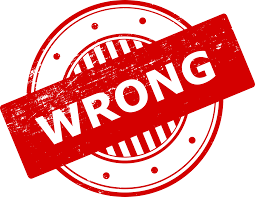 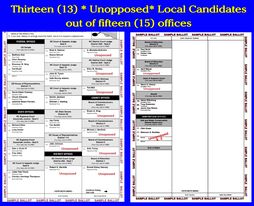 I know the demographics have shown that we are a Republican leaning county and have been for many years but does that equal to no one having a choice in the general elections?

Elections are supposed to be all about choice. All of our offices except the Sheriff and one school board member have been decided on by the Republican Party. Technically they were all voted in back in May of this past year.

The judges used to be listed on the ballot without party by their name, as should be because are they not supposed to be an

impartial groups of people who just look at the law in relation to court cases? Mike Hager in his short but memorable term in the Legislature pushed through to have the party recognized on the ballot. WHY????

All this does is cause discord among the voters. The party can support whom they will financially but saying that “your candidate” reflects only your values when he/she is running for a job to represent everyone’s values seems unnecessarily divisive. Again, NONE of these people make policy!

There will have to be a legislative act to take off the party affliction of local candidates for elected office but it should be. We as a nation, a state, and a county are dealing with so much division that having this, as an added way to divide is ridiculous.

We have two unaffiliated candidates running, Tony Roberson for Sheriff and Parker Tate for School Board District 2. As an Unaffiliated voter myself (got tired of the “my way or the highway” attitude of both parties years ago) I commend them. They decided to run for office without the support of a political party. This means they had to get signatures to even get on the ballot and figure out financing by themselves. This is no small feat folks especially going against the very powerful and well-funded Republican Party here.

I am not endorsing either candidate but I am saying they cared enough to put in the sweat equity to run for office. What has happened to everyone else in this county? Do they just not care enough to try to make a difference?

There should never be an uncontested office on a ballot in this county. It doesn’t matter if you think the current people in office are doing a good enough job. There still should be a choice for the voters. Sometimes it is not about winning but showing that you care enough to try.

Honestly I think the Democrats of this county should be ashamed that they found no one to run for office except Jason Wease and he actually is answering to a higher calling than them.  People need to wake up and get involved in local government. These people directly affect your daily lives and decide how your tax dollars are garnered and spent.

Times are going to get rough. A recession is coming soon and we will have people suffering mightily. Our people, our neighbors, our families will need everything we can dig up to help them. Get involved in how this need will be met. I would say be on a committee but those are hand picked here also. Go to meetings, and sign up to speak. Stand up, speak out, and be heard!

There is nothing we can do about this election now but think about the future. At least give the people a choice!