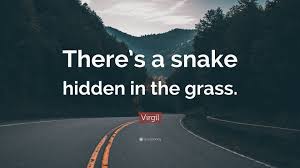 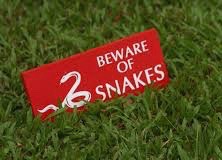 When I was quite young I remember my great-grandmother and her neighbor referring to a man they knew as a snake in the grass. I actually was deathly afraid of snakes so I asked her if there were snakes in our grass. That’s when she explained to me what the phase meant.

She said “A snake in the grass is someone who appears harmless or even friendly but in fact is treacherous. They leave you alone as long as you stay on the right side of them but step even a little on the wrong side and they strike.”

Rutherford County has had its share of “snakes.” Here lately they seem to be coming out of hiding more and more.  A “snake in the grass” is often considered a deceitful person. Unfortunately we are finding out who these people are by their actions. People in authority who feel that “laws” do not apply to them, or their friends.

Law Enforcement Officers who do “favors” for those in authority are “deceitful” to the public they serve. Also when they go on social media and try to skew the facts of what actually happened in the performance of a “favor” they are showing their true nature. There are Hatch Act laws for a reason.

The snake in the Garden of Eden lied and seduced Eve into biting the apple. He told her what she wanted to hear in order to get her to do what he wanted her to do. Much like a lot of our politicians in office today. They tell the public what they think they want to hear. They spin the truth to the point of where it seems even they don’t recognize it anymore.

D.A. Ted Bell boasts about the three long prison sentences he got for child predators in his mailer yet he doesn’t tell you about the multiple plea deals he has made with predators that stay out of jail and are free to victimize others. We all know a pedophile does not change. That is NOT protecting our children.

Ted Bell ran on reducing jail time and getting cases heard sooner. He has the longest jail times for offenders yet and has cases still pending after 6+ years.

Ted Bell is running on an integrity platform yet he allowed friend and former Judge Randy Pool to not be prosecuted and retire with full benefits even after admitting his crimes.

Ted Bell is promoted by DraintheSwampConservatives PAC (most members of the former Tea Party) Quite a few of these people have spent years deceiving others. It’s fascinating how they want to “drain the swamp”,yet promote the very people that live in it.

Ted Bell has spent almost sixty thousand dollars ($60,000) as of today on this political campaign alone. I realize that that may not be a lot of money to him but it is more than a yearly salary for most of us. Why, if he is doing his job so well would he need to spend that kind of money to run for office again?

It is time to identify these “snakes” and remove them from our “grass.”  These elected officials and Law Enforcement officers work on the taxpayer’s dime. They should work FOR the people, not for themselves or their “friends.”

We deserve better that what we have had for the past seven years in the District Attorney’s office.

We deserve integrity, transparency, and most of all, honesty. I am sure some people had good intentions at some point but we all know what road is paved with those. 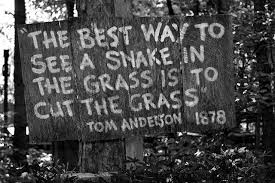 Look around, open your eyes and be aware that what you are being told by these people is not what is truly happening. Don’t let the “grass” grow so high that you can’t see the “snakes”.

We have an opportunity to make a difference, to make a change. We can “cut” the grass ourselves. We can take back our counties and demand accountability from our officials. It has been a long time coming here. We the people deserve better than what we have had. (see above) Vote for change. It starts with you.

Go vote. We are worth it!

Early voting is going on through May 14th with the final primary vote being May 17th. All unaffiliated persons can vote in the Republican primary. It will decide the race for District Attorney.