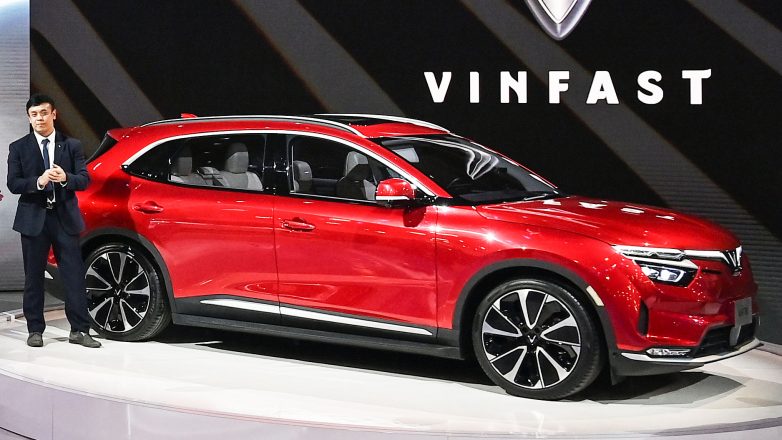 RALEIGH – VinFast, the Vietnamese auto manufacturer building a new line of electric vehicles, has selected North Carolina for its first North American automotive assembly and battery manufacturing plant, creating 7,500 jobs, Governor Roy Cooper and Vingroup Vice Chair and VinFast Global CEO Le Thi Thu Thuy announced today during an event at the new Raleigh Convention Center. The company intends to invest up to $2 billion in phase 1 of its project at the Triangle Innovation Point megasite in Chatham County. This will be North Carolina’s first car manufacturing plant and it is the largest economic development announcement in the state’s history.

“North Carolina is quickly becoming the center of our country’s emerging, clean energy economy,” said Governor Cooper. “VinFast’s transformative project will bring many good jobs to our state, along with a healthier environment as more electric vehicles take to the road to help us reduce greenhouse gas emissions.”

VinFast’s factory will create a major manufacturing center on a 1,977 acre (800 hectare) plot for phase 1 with 3 main areas: electric cars and buses production and assembly, EVs batteries production, and ancillary industries for suppliers.

Construction for phase 1 of the factory will start in 2022 after the construction permit is granted and production is expected to start in July 2024. The capacity of phase 1 is expected to be 150,000 vehicle/year. According to the MOU, VinFast will continue to invest in this factory in various phases. Vehicles to be produced at the site include the VinFast VF 9, a 7-passenger all-electric Sport Utility Vehicle (SUV) and the VinFast VF 8, a 5-passenger, all-electric mid-size SUV.

The North Carolina Department of Commerce coordinated the state’s recruitment of VinFast, which also involved state, regional, and local organizations.

“Automotive assembly plants are incredible engines for economic growth, due to the positive ripple effects they create across a region’s economy,” said North Carolina Commerce Secretary Machelle Baker Sanders. “I’m so pleased that VinFast has decided to launch their North America manufacturing operations from our state, and we’ll work hard to make sure they find the skilled workforce they’ll need to grow and thrive in North Carolina.”

VinFast, founded in 2017 as a wholly-owned subsidiary of the Vietnamese conglomerate Vingroup, is a global producer of premium automobiles. Headquartered in Hanoi, Vietnam, with a state-of-the-art vehicle production facility in Hai Phong, Vietnam, that has the capacity to produce 950,000 vehicles per year by 2026.

VinFast has established global operations in the US, Canada, Germany, France and the Netherlands. VinFast currently provides an ecosystem of EV products in its home country of Vietnam, including e-scooters, electric buses and electric cars, charging station system and green energy solutions.

Last November, VinFast announced the VF e35 and VF e36 (now named the VF 8 and VF 9) at the 2021 Los Angeles Auto Show. The company introduced three new EVs (the VF 5, VF 6 and VF 7) at the 2022 Consumer Electronics Show (CES), which combined with the earlier models allows the company to serve all five major vehicle segments, from small crossover to large SUV. Each vehicle embodies VinFast’s goal of offering leading technology with a premium experience at an attainable price point. Reservations for VF 8 and VF 9 was announced globally at the beginning of 2022.

VinFast is the only premium car producer in Vietnam and has been growing with an impressive rate. The company completed the construction of its factory in Haiphong and developed its first three car models in just 21 months.

Recently, Vingroup started construction of a battery plant in Ha Tinh, Vietnam on a 8 hectare plot for phase 1, with a capacity of 5 gigawatt hours (GWh) per year. The facility is expected to be fully installed and run at full capacity from late 2022.

The project in North Carolina affirms VinFast’s commitment in investing and developing business in its international markets in general and the U.S. in particular. It will also ensure VinFast’s capability in manufacturing autonomy globally.

VinFast’s project in the state, which will officially be executed through a newly formed company, will be facilitated in part by a Transformative Job Development Investment Grant (JDIG) approved by the state’s Economic Investment Committee earlier today. VinFast’s project is estimated to grow the state’s economy by at least $71.59 billion over 32 years, the time period when the grant could be active. Using a formula that takes into account the new tax revenues generated by the new jobs, as well as a company investment of $4 billion, the JDIG agreement authorizes the potential reimbursement to the company of up to $316.1 million, paid over a time period of 32 years.

Like all grants from the JDIG program, any state payments only occur following performance verification each year by the departments of Commerce and Revenue that the company has met its incremental job creation and investment targets.

The state also anticipates providing additional support to the project by means of a state appropriation of as much as $450 million, to cover site preparations, road improvements, and additional water and sewer infrastructure.

Salaries for the new jobs will vary by position, but taken together will average $51,096, increasing the regional payroll by more than $383 million every year. The Chatham County average annual wage stands currently at $41,638.

“Today’s announcement is another example of the continuing growth of North Carolina’s economy fueled by low taxes, a strong workforce, and reasonable regulations,” Sen. Phil Berger (R-Rockingham) said. “VinFast’s commitment to North Carolina solidifies our position as a global leader for fostering innovation and supporting businesses.”

“The arrival of Vinfast to North Carolina is great news for our state and for the thousands of North Carolinians who will fill the new jobs created as a result,” said North Carolina Speaker of the House Tim Moore. “Today’s announcement marks significant investments in infrastructure, transportation, and workforce development. North Carolina has distinguished itself as an attractive place for companies to land and continues to be recognized as a top state for businesses, thanks in large part to the hard work of the legislature that has resulted in lower taxes, fewer regulatory roadblocks, and a stronger workforce.”

“As a native of this area I am incredibly excited to see VinFast choose to join our community,” said Representative Robert T. Reives. “Everyone in our region and across the state welcomes VinFast to our community, and we are committed to help this company succeed in North Carolina.”

“Many people and organizations have worked tirelessly behind the scenes to bring these new jobs and investment to Chatham County,” said N.C. Senator Valerie Foushee “Everyone in our region and across the state welcomes VinFast to our community, and we are committed to help this company succeed in North Carolina.”

VinFast – a member of Vingroup – envisioned to drive the movement of the global smart electric vehicle revolution. Established in 2017, VinFast owns a state-of-the-art automotive manufacturing complex with globally leading scalability that boasts up to 90% automation in Hai Phong, Vietnam.

Strongly committed to the mission for a sustainable future for everyone, VinFast constantly innovates to bring high-quality products, advanced smart services, seamless customer experiences, and pricing strategy to inspire global customers to jointly create a future of smart mobility and a sustainable planet. Learn more at: https://vinfastauto.com.

Established in 1993, Vingroup is one of the leading private conglomerates in the region, with a total capitalization of $35 billion from three publicly traded companies (as of November 4, 2021). Vingroup currently focuses on three main areas: Technology and Industry, Services and Social Enterprise. Find out more at: https://www.vingroup.net/en.