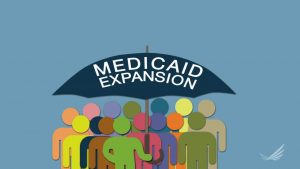 On her morning commute to work, Dr. Laura Ucik, a rural family physician in the northern Piedmont of North Carolina, thinks about the patients who could have avoided serious illness and injury had they qualified for Medicaid years ago.

One such patient with severe stomach pain couldn’t afford an ultrasound to identify whether or not they had gallstones.

Another arrived with a swollen leg, a common but urgent symptom of a blood clot. Unable to pay for imaging and blood thinning medication, they left without a diagnosis.

“I have a patient who had rectal bleeding for over a year, and they were eventually diagnosed with rectal cancer,” Ucik said. “Recently, they found out the cancer had begun to metastasize to other parts of the body. It all could have been avoided if they had had insurance to cover a colonoscopy.”

While thousands of North Carolinians struggle to keep their health in check, healthcare providers across the state are being pushed to their limits as people with no coverage flood their offices.

The gap refers to people whose income is too high to qualify for Medicaid, but not enough to afford other insurance. In addition, all childless non-disabled adults are ineligible regardless of how low their income is.

Medicaid was created to provide health insurance to low-income families and individuals in 1965. However, 12.9% of North Carolina’s population remained uninsured in 2018.

For healthcare providers, the gap has meant struggles to provide care for patients who wait too long or don’t have the ability to afford testing and treatment. It means long hours trying to find care.

Dr. Joel L. Gallagher is an allergist-immunologist with offices in Reidsville and Greensboro, North Carolina. About two-thirds of his patients are either uninsured or covered by federally funded insurance like Medicaid or Medicare.

“Scrambling to find the cheapest option adds a lot more time to providing healthcare, which isn’t ideal when you’re treating asthma,” Gallagher said. “Many of my patients need medication everyday just to breathe.”

When Gallagher’s office can’t find an affordable solution, they often send patients home with drug samples. For some, these samples are the only way to get medication because they can’t afford a prescription. However, these samples only last a few weeks.

As a result, some patients ration their medications at home. When an asthmatic isn’t properly dosed for their condition, they can have asthma attacks, which are more serious and can be traumatizing to patients.

Although Gallagher can occasionally waive the charges for a breathing test or other procedure, he has to be careful that his office isn’t writing off too much. “We still have to worry about paying our staff’s salaries at the end of the day,” he said.

Still others have taken up a personal campaign to persuade North Carolina politicians to approve expansion. The political atmosphere has held talk of expanding for years, but so far, the majority of legislators in the state remain in opposition. However, support for expansion is shifting, and although the change is slow, more representatives are beginning to show their support.

At the forefront of this movement in North Carolina is Casey Cooper, the CEO of the Cherokee Indian Hospital. There, Cooper and his staff serve all members of the tribe, as well as select other groups, including spouses of a tribe member and all children under the age of 19.

Although activism isn’t in his job description, Cooper recounts a personal story about how the lack of health insurance impacted a childhood friend.

Cooper and Albert Hartline went to high school together in Jackson County. Hartline suffered from depression and substance use disorders, the combination of which eventually led to his unemployment and lack of health insurance.

Several years later, Hartline was diagnosed with cancer. He knew he didn’t have the resources to pay for his treatment, and his mental health and addiction spiraled out of control. According to Cooper, life became unbearable for Hartline because he knew he couldn’t afford treatment for his potentially terminal illness.

In December 2020, Hartline died by suicide shortly after killing his neighbor. Hartline got caught in a situation that could have been avoided had he been able to get insurance, said Cooper. In his office at the hospital, a plaque memorializing Hartline sits on the windowsill.

“People think that folks without insurance are choosing not to work, which is a horrible misunderstanding,” Cooper said. “The majority of uninsured people are working, and they are working poor.”

In addition to the stereotype that uninsured people are unmotivated to improve their situation, Medicaid expansion carries another generalization regarding what, and who, it was related to in the past.

“For a lot of Republican officials, Medicaid expansion is tied to Obamacare, which they’re against, and maybe that’s that,” said Madeline Guth, a policy analyst in the Kaiser Family Foundation’s Program on Medicaid and the Uninsured. “State politics can vary, but there’s a lot of long-standing opposition in North Carolina.”

Since the U.S. Supreme Court’s decision to make participation in Medicaid expansion optional for states in 2012, the number of people who would qualify has increased.  In many of North Carolina’s 78 rural counties, health care clinics and doctor’s offices are few and far between, making it difficult for people to get the care they need before their condition takes a turn for the worst.

As part of its efforts to provide universal care, the Cherokee Indian Hospital administers treatment regardless of the patient’s ability to pay. While this relieves the financial stressor from members of the tribe, the hospital is spending millions of dollars every year that could be used elsewhere.

In some cases, adding a financial burden can mean the difference between someone living and dying because of their condition; a situation Ucik knows all too well.

On a daily basis, she sees upward of 10 patients living with medical issues that could be treated if they had insurance. However, most can’t afford the cost out of pocket and are unable to receive proper treatment day after day.

“It is unbelievable the things we are doing as healthcare workers to try and provide for our patients without the proper resources,” Ucik said. “Every day I am bending over backwards to solve problems that can only be diagnosed and treated with tests, medications and referrals to specialists.”

After another long day of finding temporary solutions to long-term problems, Ucik reflects on how her job would be so much easier if her patients had the ability to get help before their situation turned desperate.

“The money we aren’t spending now when people come in without insurance doesn’t even compare with the money we spend later on once their conditions have worsened,” Ucik said. “This isn’t healthcare; people will continue to suffer until the legislation changes.”