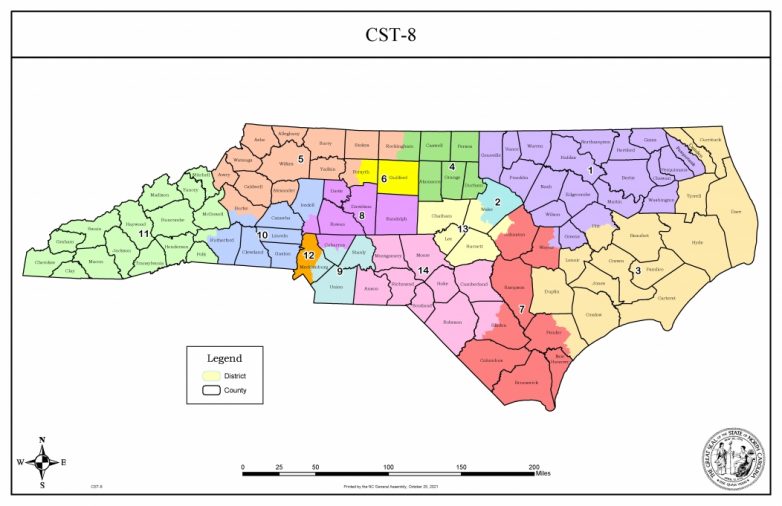 In the first of what will be several court hearings on North Carolina’s political maps, lawyers for the North Carolina NAACP and Common Cause argued Tuesday that the Republican-controlled state legislature followed an unconstitutional procedure to draw the political districts for its 14 seats in the U.S. House and the state’s own House and Senate.

But Superior Court Judge Graham Shirley II, a Republican judge, ruled from the bench that he had no authority to do what the plaintiffs were asking of the courts.

The lawsuit, filed Oct. 29, four days before the legislature passed the new political maps into law, asked the court to delay the March primaries until May and push back candidate filing from December to February. The move would give the legislature enough time to redraw the state’s political maps while taking voter race into account, which the lawsuit argues is necessary for the state to follow the law.

Shirley said he could neither delay the election nor direct the legislative map-drawing process without the maps themselves being ruled unconstitutional.

“There’s no harm to address in this case,” Shirley said, denying each of the plaintiffs’ motions.

From the opening moments of the hearing, Shirley pressed Hilary Klein, the voting rights lawyer for the Southern Coalition for Social Justice representing the plaintiffs, about the court’s authority to intervene.

The maps the legislature passed are presumed to be constitutional until proven otherwise, Shirley said. Though there are two pending lawsuits claiming the maps are gerrymandered and therefore unconstitutional, neither has yet been heard.

Shirley will sit on the three-judge panel to hear the first of those constitutional arguments on Friday, and he said the panel will have a decision in that case by Monday, when candidates will begin filing for office unless the court intervenes.

But Klein said the plaintiffs were not asking for the maps to be ruled unconstitutional. Rather, they were asking the court to clarify a disagreement in the law between the plaintiffs and the state legislature about the process that must be followed to create political maps.

Shirley did not accept the argument. Without the current maps first being deemed unconstitutional, Shirley asked how he could delay the elections or order the legislature to draw new maps, which could create a conflict of which maps are applicable to the election.

The plaintiffs in this case attempted a novel legal strategy, challenging the process rather than the outcome of political mapmaking.

Shirley asked whether the plaintiffs were aware of any case in which “the process was attacked, and not the final maps.” Klein said no, not for redistricting cases, though the approach was used in other types of legal challenges.

Phil Strach, a private attorney representing the Republican leadership of the state House, Senate and the election committees in each, argued that granting the plaintiffs’ request would be a violation of the separation of powers.

Lawsuits are normally filed after legislation is passed, not before, the defense filing shows.

During the defense’s arguments, Shirley asked how the state legislature could have come up with maps that comply with the Voting Rights Act, which protects the rights of minority voters, without considering race.

Strach said he believes the maps are compliant, though he also said no analysis has been done to prove it. He added that no court had shown the maps were unconstitutional, either.

The question of constitutionally will be addressed with the challenges from the N.C. League of Conservation Voters and the National Redistricting Foundation, a nonprofit organization backed by the Democratic Party.

Though Shirley denied the motions for preliminary injunction, the NAACP case will be heard.

“While we are disappointed by today’s denial of a preliminary injunction, plaintiffs remain convinced that the state legislature has failed North Carolinians by redrawing voting districts focused on political gain and depriving voters of color of their constitutional rights to fair political representation,” a statement from the Southern Coalition for Social Justice said.

The plaintiffs are waiting for Shirley to release his full order to understand what survived the day’s hearing and how they will proceed, Sailor Jones, communications director for SCSJ, said.

The state’s Republican leadership, which was responsible for drawing the new political maps and were sued in each of the lawsuits, has been dismissive of the case from the start.

When the case was filed, Republican Destin Hall, chairman of the House Standing Committee on Redistricting, said this round of redistricting was the most transparent in history.

“I stand firmly behind our process and look forward to fighting against this ludicrous lawsuit,” he said.