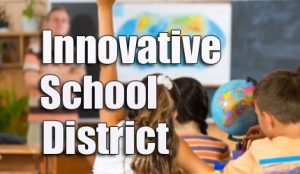 IThe Innovative School District (ISD) is again without a superintendent.

NC Department of Public Instruction spokeswoman Blair Rhoades has confirmed that James Ellerbe resigned as superintendent of the single-school district created by lawmakers in 2016 to improve academic achievement at low-performing schools.

Rhoades said a search for a new superintendent has begun. In the meantime, she said, Derrick Jordan, NCDPI’s assistant superintendent of Agency Schools, would oversee ISD operations.

Ellerbe was the third superintendent of the controversial school district. He was hired to lead the district in 2019 after former superintendent LaTeesa Allen abruptly resigned without explanation.

Allen had replaced Eric Hall who stepped down to become chancellor for innovation at the Florida Department of Education.

Southside-Ashpole Elementary School in Robeson County is the district’s lone school. It began the 2021-22 school year Monday with its third principal as an ISD school.

Early plans called for as many as five schools to be swept into the ISD. However, districts in Durham and Wayne County rejected ISD advances and embraced a Restart school improvement model. Under that model, schools can operate free of some of the rules district leaders say prevent them from turning around low-performing schools. Restart schools, for example, are given more calendar, hiring, and spending flexibility.

Ellerbe often clashed with former Southside-Ashpole principal Kenneth Bowen and Achievement for All Children (AAC), a for-profit, charter operator selected to manage the school, over the duties and responsibilities of the principal and management firm, which hired Bowen.

AAC is led by former State Rep. Tricia Cotham, a Democrat from Charlotte, who served in the state legislature from March 2007 to January 2017. NCDPI and the management firm parted ways last year because AAC was unable to provide remote learning opportunities for students after many schools closed for in-person learning due to the COVID-19 pandemic.

A year ago, however, Policy Watch obtained a confidential letter that alleged AAC had failed to meet contractual obligations in running Southside-Ashpole.

The letter cited numerous instances in which AAC allegedly failed to meet deadlines for contractually mandated reports. The firm reportedly failed to submit a proposed budget due May 1, 2020 and an annual financial audit that was due Oct. 15, 2019. Nor, says the letter, did AAC submit a compliance report for the district’s Exceptional Children’s Program or make requested corrections to COVID-19 staff work logs.

Dated May 5, 2020, the unsigned letter was “Prepared at the Direction of Counsel for the Provision of Legal Advice.” It was addressed to State Board of Education Chairman Eric Davis and the state board and recommended that state education officials terminate the five-year contract with AAC three years early.

The hiring of a new superintendent might become a moot point.

The Republican-backed school reform model has failed to produce promised results and could be phased out in two years.

A provision in the state Senate’s proposed 2021-2023 budget calls for North Carolina to “Transition from the Innovative School District Model” and end plans to select additional schools for the district.