On August 12, 2020, Attorney Krinn Evans and Attorney Andrew LaBreche received letters dated August 10, 2020 from Resident Superior Court Judge Tommy Davis, Chief District Court Judge Robert Martelle, and District Court Judge Ellen Shelley stating that “[u]ntil further notice, I have recused myself from all cases in which you appear . . . .” Each letter also indicated that the judges were notifying the Rutherford and McDowell Clerks of Court, the District Attorney’s Office, and (for the District Court Cases) the Department of Social Services.

None of the judges provided any basis for their recusals. 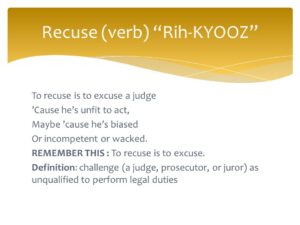 On the same day, Attorney Evans sent an email to each judge noting that he “received letters from you citing a need to recuse from my cases. No specific reason has been cited[,]” and emphasizing that “it is still necessary for my clients cases to be resolved in a timely manner.” To that end, Attorney Evans asked “[w]hat plan do you have going forward to allow me and my clients access to . . . the courts?”

That evening, Judge Davis replied that, for all Superior Court sessions up until August 31, 2020, he would “schedule [Attorney Evans’] cases for a particular day and have a different judge commissioned for that day.” As of the date of this article, Judge Davis refused to provide any additional information as to court dates and availability from September 1, 2020 forward, and Judges Martelle and Shelley provided no response.

On August 19, 2020, Attorney Evans was informed by McDowell Clerk of Court Melissa Adams that she too was recusing herself from all current and future cases in which Attorney Evans was counsel of record. As with the Superior Court and District Court Judges, Adams refused to provide any basis for her recusal.

The procedure for judicial recusal/disqualification is prescribed by statute. For example, “[a] judge on his own motion may disqualify himself from presiding over a criminal trial or other criminal proceeding.” N.C. Gen. Stat. § 15A-1223(a). Under this procedure, “[a] motion to disqualify must be in writing and must be accompanied by one or more affidavits setting forth the facts relied upon to show the ground for disqualification.” N.C. Gen. Stat. § 15A-1223(c).

Each judge identified above, subverted this statutory mandate by notifying the Clerks of Court and District Attorney’s Office in order to shift the dates of all scheduled cases to different dates in front of outside judges. In doing so, the judges utilized improper legal mechanisms that ensured their underlying motives for the blanket recusals were not made publicly on the record, in writing, and accompanied by affidavits identifying what bases the judges believed warranted recusal.

THE JUDICIAL COUNCIL APPEARS TO REASSERT ITS EXISTENCE AND INFLUENCE

The Judicial Council has operated as an extra-judicial body designed to address and/or resolve individual cases outside of any public legal proceeding, without the participation of any parties (other than the District Attorney advocating for the prosecution), and as a retaliatory entity targeting any attorneys or members of the legal community that take any actions the Judicial Council considers harmful to its members political prospects or consolidated effort to control all aspects of the legal system.

Since the date of its creation, the Judicial Council has ignored demands from the legal community to discontinue its unlawful practices – all of which have occurred in direct violation of the North Carolina public meetings and public records laws, and that continue to violate the most basic and fundamental rights to due process for every litigant whose case is discussed and/or impacted by any decisions made by the Judicial Council.

Within two (2) months’ time of RC Catalyst’s publication of the article detailing the conduct of the Judicial Council, it appears that the council members have now taken a series of collective actions – unprecedented in any federal or state court in the United States, i.e., the recusal of all judges in an entire district against two attorneys, with no explanation, and with active assistance from other officials on the Judicial Council to allow such recusals to occur outside of any public legal proceeding.

Rather than opting to discontinue the practices discussed in the June 29, 2020 article, the Judicial Council has instead publicly demonstrated both the Judicial Council’s existence as well as the council members’ apparent intention to continue taking deliberate, concerted, and non-transparent efforts to undermine the most fundamental and core aspects of any legal system, i.e., the right to a fair and impartial resolution of any litigant’s case, free from bias, and conducted transparently in public proceedings that jeopardizes the integrity of an entire legal system.

After discovering the coordinated decision of the judges mentioned above to recuse from Attorney Evans and Attorney LaBreche’s cases, RC Catalyst sought comment from both attorneys in an effort to understand the motivations for the judges’ actions.

In a comment provided to RC Catalyst, Attorney Evans stated that he “know[s] of no action that I have taken that would cause this to happen. In times like these, with questionable actions on the part of elected officials on both a local and national level, the idea that this decision may have been made in secret is truly appalling.” Attorney Evans, however, indicated that he would not make any guesses or assumptions as to the underlying bases for the recusals.

In our requests for comment from Attorney LaBreche, he indicated that he “is not inclined to ascribe any specific motivation as to the judges’ decision to recuse at this point.” When asked if he believed the basis could be retaliatory, Attorney LaBreche stated that “unless the judges fail to make outside judges available in all contexts necessary for handling my cases, the recusals have absolutely no impact on any of my clients, cases, or me. Although I will take all necessary actions to address any issues, impediments, and/or delays that may arise with respect to ensuring alternative judges are made available, I am far more concerned that these decisions appear to have been made at the same time, with the participation of all judges, and outside of any legal proceeding.”

As reported in the Daily Courier, both Attorney Evans and Attorney LaBreche have been involved in addressing the misconduct of former-Chief District Court Judge Randy Pool. In seeking comment from both attorneys as to their roles in the ongoing legal proceedings involving former-Judge Pool, Attorney Evans declined to comment on any aspects of a case currently before the court, stating that he cannot discuss any issues involving his client, Jennifer Tierce – one of former-Judge Pool’s victims that is now being criminally charged by District Attorney Ted Bell. Attorney Evans did, however, note that, “while I have no information as to why these recusals have occurred, these actions will, in no way, prevent me from aggressively representing Jennifer Tierce or any of my other clients.”

Attorney LaBreche did, however, provide the following statement as to the current recusals and the continuing investigations into former-Judge Pool’s misconduct:

“I certainly understand the public’s need, if not right, to know what has occurred within its own government. Unfortunately, I cannot currently discuss this matter, but will do so when permitted. As to the recusals having any relationship to issues surrounding former-Judge Pool, I have been provided with no information that could answer that question. As I stated previously, it is difficult for me to believe that any of the current judges in this district would have any motivation to take retaliatory actions toward me, and would be very concerning if any possible retaliatory actions were taken in response to any involvement I may have had in preventing former-Judge Pool from harming more women appearing before him. Likewise, I have no information as to whether the judges currently recusing themselves are doing so because of becoming the target of any ongoing investigations involving former-Judge Pool, may be assisting with these investigations, or otherwise.”

HOW THE COMMUNITY CAN ACT TO ADDRESS GOVERNMENT MISCONDUCT

As we continue to report on topics pertaining to the state of the local governments in Rutherford and McDowell Counties, RC Catalyst encourages the community to file any complaints, express concerns, or request additional information by contacting the governmental entities responsible for addressing the issues identified in this, and all preceding articles, in this series to date. The appropriate entities and points of contact are included in the following link:

Corruption and Politics. You Have A Voice! (updated)

If you would like to provide any information as to the local government, express concerns as to any issues already discussed or that will be identified in forthcoming articles, please contact RC Catalyst at info@rcCatalyst.com . All information provided, including the identities of those contacting us, is strictly confidential.